We have a new moon coming at us today in Pisces. It already feels like a magical time but when a solar eclipse is added in, some folks may feel like the stakes are ramped up. Here’s the chart for new moon tonight at 8:54ET.

Of course, this is a time to set new intentions. Piscean type goals would be a good look for this lunar cycle- spiritual service, compassion, creative endeavors, forgiveness and tie cutting work, etc. Depending on the house this new moon occupies in your chart it, could mean different things for you than for me or anyone else. This new moon happens in my second house so this could be a great time to ask for forgiveness from me if you owe me money (no guarantees at all).

In general, the mutable water energy of Pisces reminds us to dream big and reconnect. Mutable signs clear out what could go stagnant due to the fixed signs that come before them. Stuffy emotional energy is cleated our with Pisces. When the ties that have grown heavy keep us from moving forward, Pisces clears it up. 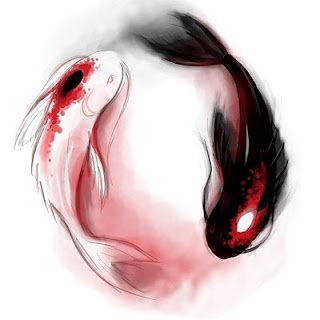 By practicing compassion and faith, we are able to slough off the emotional cobwebs that can hinder us from looking at what could be instead of what already is. That’s the beauty of Pisces. By having us accept things and people as they are we can move into space that opens us to source and dreams beyond imagination.

This new moon is opposed by Jupiter in Virgo so a word of caution is necessary. Don’t go overboard with rose colored glasses in order to move forward. Use the square of Saturn in Sagittarius,which others may see as a hard aspect to deal with but I see it as useful for this setup, to keep your feet grounded as you dream. Jupiter typically likes to go overboard but with it being in Virgo that tendency could be limited in most areas except for nervous tension and worries. I think it should be noted that this new moon happens in Pisces but touches on planet in sign combos that push for a melding of big ideas with realistic planning. If you don’t really want it to happen, don’t start it now. Be as sure as you can. Stay open to possibilities but get as clear as you can to start.